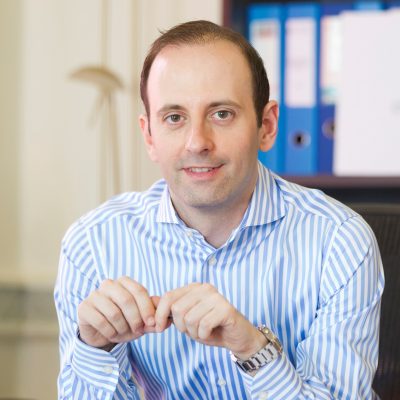 Mr. Gregory Dimitriadis has long experience in the management of large organizations.

Until recently he was the Executive Vice-President of HVA International, a Dutch consulting firm for agricultural development in developing countries established in 1879.

Previously, he was the Managing Director of IskraZaščite, a surge protection manufacturer and innovator based in Slovenia, part of the Raycap Group. He has also served as Chairman & CEO of the Athens Urban Transport Organisation S.A. (OASA) and prior to that as the Special Advisor to the Greek Minister for Development on Exports. He was a founding member and the coordinator of the Navarino Network in Thessaloniki, Greece, and has worked in London, UK, for a telecommunication multinational and a promotion firm.

He holds a bachelor with honours in electrical – electronics engineering (Manchester Metropolitan University) and a masters in telecommunications (University College London) and another masters in international business relations and international negotiations (The Fletcher School, Tufts University, USA).

In July 2019, he was appointed General Secretary for International Economic Affairs at the Ministry of Foreign Affairs.

We use cookies to ensure that we give you the best experience on our website. If you continue to use this site we will assume that you are happy with it.OkNoPrivacy policy