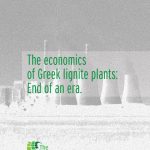 “The economics of Greek lignite plants. End of an era.”, September 2019

The report uses publicly available data in conjunction with a simple mathematical model and calculates the gross and net profits of the 14 PPC lignite units for the period January 2016-June 2019. Moreover, making realistic assumptions about future electricity and carbon prices, it estimates the evolution of the Greek lignite industry’s financial figures over the next 3.5 years. 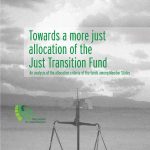 “Towards a more just allocation of the Just Transition Fund”, July 2020

The report analyzes the effect five key amendments that have already been tabled by MEPs in the various Committees of the European Parliament, in the allocation of the Just Transition Fund among Member States, and it evaluates them in comparison with the European Commission’s updated proposal. The analysis was carried out with a simulation tool that was developed based on the methodology described in Annex I of the Regulation for the Just Transition Fund. 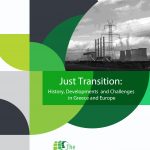 Given the urgency of the transition in Greece’s lignite regions due to the forward-bearing de-lignitization, the report describes the history of Just Transition in Greece and Europe from 2015 until today, presents the basic lessons learned, records the challenges for the future and makes specific proposals to address them. 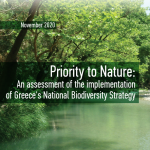 The report assesses the implementation progress of Greece’s National Biodiversity Strategy and its first Action Plan, analyzing the extent to which Greece has responded to its biodiversity commitments. The report calls on Greece to develop a biodiversity policy a par with its natural richness and sets out recommendations for Greece’s next five-year Biodiversity Action Plan.